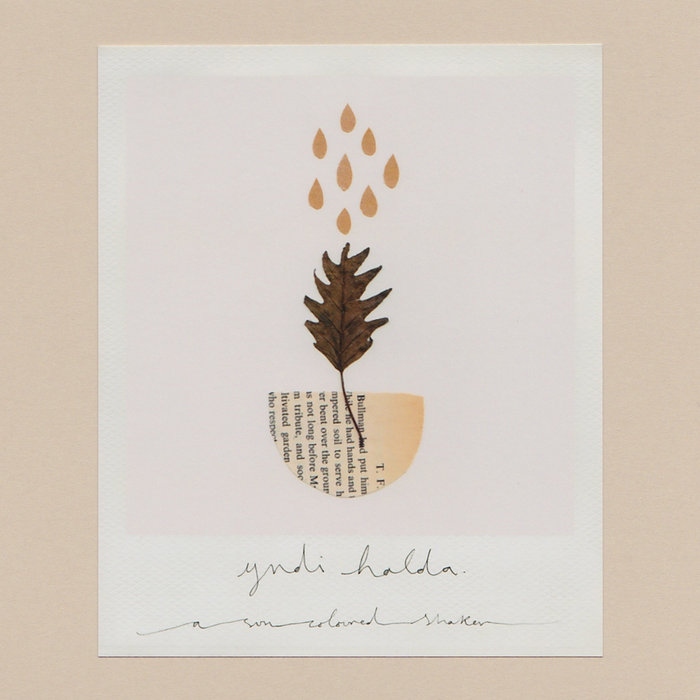 Sound In Silence proudly announces the addition of yndi halda to its roster of artists, presenting their brand new EP, A Sun-Coloured Shaker.

Marking both a thematic accompaniment and a follow-up to their acclaimed 2016 full-length Under Summer, the new EP explores new musical and lyrical ideas, and represents a band continuing to progress their own maturing and developing songwriting.

While yndi halda have previously worn the mantles of instrumental and post-rock music, especially with their 2006 debut Enjoy Eternal Bliss, their recent movements have occupied considerably broader territories. The closely-crafted vocal harmonies and new musicalities of Under Summer have been continued in A Sun-Coloured Shaker, but their form is now embedded into a symbiotic world in which a love of true songwriting, meticulous post-classical arrangement, contemporary indie, choral music, and transcendent longform structure coexist. The band themselves reference inspirations as unexpected as Alice Coltrane, Akira Rabelais and Lonnie Liston Smith, whose influences subtly intertwine with more immediate comparison points.

‘’Like a terrible comet coming to hit the earth, and writing a list of things you would save first’’ runs the repeated, principal lyric in the piece’s would-be chorus. yndi halda can be well characterised by this line: their music is of sadness, lament, sorrow, but also full of light and ablution, delivered with joyousness.

As the band completed their last album Under Summer, having spent 9 years slowly chipping away at the composition, arrangements, production, they found that they were left with small pockets of music that they really loved, but had no home for. One piece in particular felt so attached to the rest of the LP, so much a real part of it, but was nowhere near completion even by the time they had finished working on Under Summer. They knew it had to be a part of the album eventually, but also that it needed more time. So, between tours and obligations for Under Summer, they met to continue writing, and they eventually reached their destination: an accompaniment to the album, a new song that tells the leftover stories.

yndi halda see A Sun-Coloured Shaker as the passing of night that follows Under Summer’s day. The dawn after the album’s dusk has faded. They wanted to express the realisation that something as simple and everyday as sunrise can be so truly life-giving. That the natural rhythm of nightfall and daybreak is a foundation of reality and being.

The EP, comprising one long piece of typically brilliant, 12 minute yndi halda epicness, was recorded in a handful of locations, just like the album, but primarily in a beautiful rural studio named Deep Litter, located deep in the Cornish countryside. It felt like a return to the barn of their first formation and first album recording, though Deep Litter is converted and fully equipped while for Enjoy Eternal Bliss they had to bring in a very rudimentary mobile rig. This is the first yndi halda record to feature the band’s new lineup, now augmented to a six-piece including four singers as well as keyboard/sound-design, split in half between the UK’s South-East and South-West coasts following relocations.

This is a limited edition of 300 handmade and hand-numbered collectible copies. It is packaged in a lovely hand-stamped 127mm x 127mm 285 gsm light yellow-cream cardboard envelope with the front cover image printed on a polaroid style photo paper and an insert with the tracklist and the credits printed on a 180 gsm ochre-brown cardboard. It also comes bundled with a download code coupon and a Sound In Silence card.